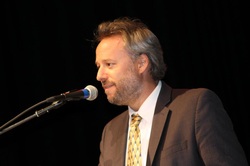 Scott wants to save the world and he knows it's only possible with your help!

Having spent over a decade inspiring and enabling at-risk and incarcerated youth as both a teacher and Director of Youth Development, Scott knows that he learned more from his students than he ever taught them. Able to see parallels in the patterns of how the youth approach and sometimes create barriers to his own life's challenges, Scott began to realize that what he had to offer was not just for young people struggling to find purpose and meaning, but for all of us striving to be better people.

Outside of the class and boardroom, Scott's professional history has included lively presentations at both national and state conferences in the areas of youth development and programming, infusing video into education, healthy masculinity and creating cultures of respect through courageous bystander models and initiatives.

Scott has appeared on local television broadcasts in Delaware and was a guest on the acclaimed Philadelphia public radio program, WHYY's Radio Times with Marty Moss-Coane. Videos created under his supervision have been featured in USA Today and aired on MTV, Comedy Central, Cartoon Network and more.

In January of 2014 Scott decided to take all of his passions and talents of art, music, social change, community building, public speaking, world changing and do it ALL FULL TIME! To do so, Scott founded The C.A.U.S.E. and now it's time for you and your organization to join the story!
Contact Scott